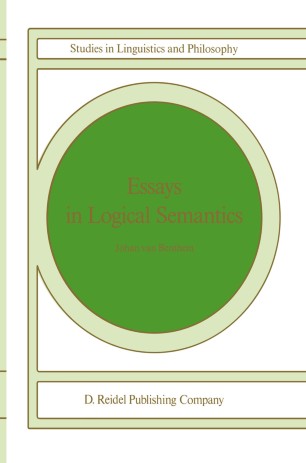 Part of the Studies in Linguistics and Philosophy book series (SLAP, volume 29)

Recent developments in the semantics of natural language seem to lead to a genuine synthesis of ideas from linguistics and logic, producing novel concepts and questions of interest to both parent disciplines. This book is a collection of essays on such new topics, which have arisen over the past few years. Taking a broad view, developments in formal semantics over the past decade can be seen as follows. At the beginning stands Montague's pioneering work, showing how a rigorous semantics can be given for complete fragments of natural language by creating a suitable fit between syntactic categories and semantic types. This very enterprise already dispelled entrenched prejudices concerning the separation of linguistics and logic. Having seen the light, however, there is no reason at all to stick to the letter of Montague's proposals, which are often debatable. Subsequently, then, many improvements have been made upon virtually every aspect of the enterprise. More sophisticated grammars have been inserted (lately, lexical-functional grammar and generalized phrase structure grammar), more sensitive model structures have been developed (lately, 'partial' rather than 'total' in their com­ position), and even the mechanism of interpretation itself may be fine-tuned more delicately, using various forms of 'representations' mediating between linguistic items and semantic reality. In addition to all these refinements of the semantic format, descriptive coverage has extended considerably.