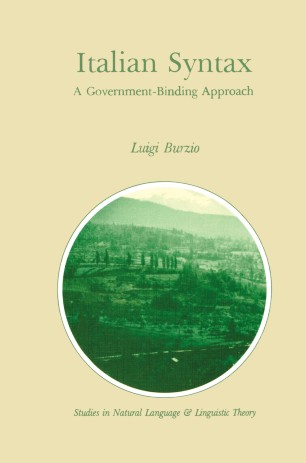 In the course of our everyday lives, we generally take our knowledge of language for granted. Occasionally, we may become aware of its great practical importance, but we rarely pay any attention to the formal properties that language has. Yet these properties are remarkably complex. So complex that the question immediately arises as to how we could know so much. The facts that will be considered in this book should serve well to illustrate this point. We will see for example that verbs like arrivare 'arrive' and others like telefonare 'telephone', which are superficially similar, actually differ in a large number of respects, some fairly well known, others not. Why should there be such differencces. we may ask. And why should it be that if a verb behaves like arrivare and unlike tetefonare in one respect. it will do so in all others consistently, and how could everyone know it? To take another case, Italian has two series of pronouns: stressed and unstressed. Thus, for example, alongside of reflexive se stesso 'himself which is the stressed form. one finds si which is unstressed but otherwise synonymous. Yet we will see that the differences between the two could not simply be stress versus lack of stress, as their behavior is radically different under a variety of syntactic conditions.