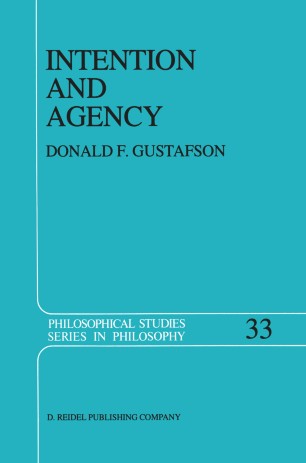 The powers of seeing, hearing, re­ membering, distinguishing, judging, reason­ ing, are speculative powers; the power of ex­ ecuting any work of art or labour is active power. Thomas Reid I Some causal efficacy is due to persons. And, some of the causal efficacy due to persons is imparted by, not merely to, them. Further, some of the causal efficacy due to persons and imparted by them is imparted by and not merely to their physical, active bodies. Otherwise there is no agency. I will assume, with everyone at the outset, that the world contains agency of the kind found in some of a person's comings and goings, movings and changing of things. Agency is exhibited in more and in less sophisticated forms, that is, in any sophisticated, artful activity and in less complex, non-articulate physical activities. In both there appears to be more than mere causal efficacy imparted to the environment by a person. In sophisticated agen­ cy activities are organized, guided, purposive and purposeful comings and goings, movings and changes. And purpose is not absent in less soph­ isticated purposive activities of active creatures. So I shall argue in what follows. Now is the time for introducing the themes, topics, and issues to be considered, and the plan and purpose in them.