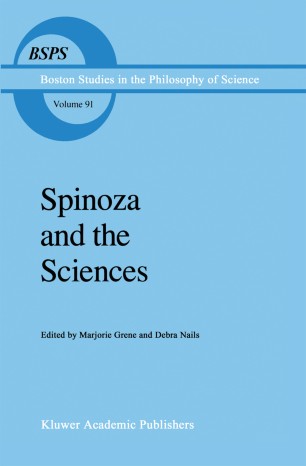 Spinoza and the Sciences

Part of the Boston Studies in the Philosophy of Science book series (BSPS, volume 91)

Prefatory Explanation It must be remarked at once that I am 'editor' of this volume only in that I had the honor of presiding at the symposium on Spinoza and the Sciences at which a number of these papers were presented (exceptions are those by Hans Jonas, Richard Popkin, Joe VanZandt and our four European contributors), in that I have given some editorial advice on details of some of the papers, including translations, and finally, in that my name appears on the cover. The choice of speakers, and of addi­ tional contributors, is entirely due to Robert Cohen and Debra Nails; and nearly all the burden of readying the manuscript for the press has been borne by the latter. In the introduction to another anthology on Spinoza I opened my remarks by quoting a statement of Sir Stuart Hampshire about inter­ pretations of Spinoza's chief work: All these masks have been fitted on him and each of them does to some extent fit. But they remain masks, not the living face. They do not show the moving tensions and unresolved conflicts in Spinoza's Ethics. (Hampshire, 1973, p. 297) The double theme of 'moving tensions' and 'unresolved conflicts' seems even more appropriate to the present volume. What is Spinoza's rela­ tion to the sciences? The answers are many, and they criss-cross one another in a number of complicated ways.