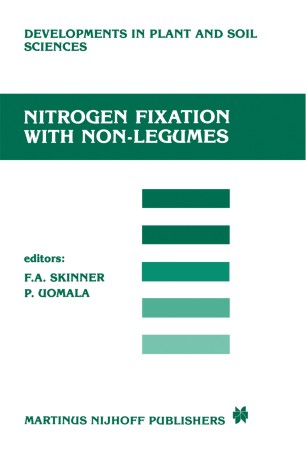 Part of the Developments in Plant and Soil Sciences book series (DPSS, volume 21)

Biological fixation of nitrogen by organisms and associations other than those concerned in the legume-Rhizobium symbiosis has attracted increasing attention since the firstintemationalworkshop on the theme at Piracicaba, Brasil, in 1979. Approximately 150 scientists gathered on September 2-8, 1984, at the Hanasaari Cultural Centre near Helsinki, Finland, for the third international meeting on nitrogen fixation with non-legumes. Forty-two papers and 39 posters were presented; 32 of the papers have been broughttogetherin this publication. The Symposium was generously sponsored by the FinnishNational Fund for Research and Development (SITRA) in connection with a large project on biological nitrogenfixation and utilization ofnitrogen extending from 1980 to 1985. The Symposium was organized jointly by SITRA, which dealt with all practical matters very efficiently and with impressive concern for the welfare of the participants, and Societas Biochemica, Biophysica et Microbiologica Fenniae, the society of Finnish microbiologists, which made valuable contributions on scientific matters. As in the previous symposium at Banff, Canada, in 1982 the programme did not involve parallel sessions~ all participants had the opportunity of listening to all presentations. Consequently, the FIN- NIF Symposium profited from a steady audience and the consistency this gave to the discussions. In view of the growing interest in N-fixation with non-legumes and the continuous broadening of the field, such an arrangement may not be possible in the future. I thank all participants for their contributionsto both oral sessions and poster presentations, and hope that this publication will become a frequently quoted source of knowledge.

`The book is well designed and pleasing to the eye. The book is strongly recommended.'
Buy options