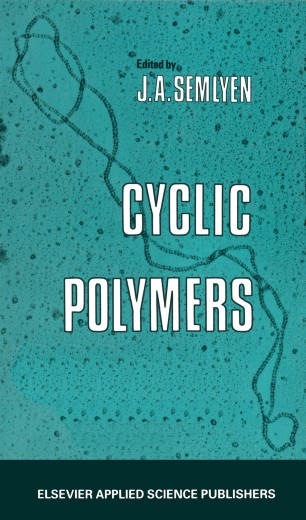 Synthetic polymers based on long chain molecules have been investigated intensively for over 50 years. They have found important applications as plastics, fibres, rubbers and other materials. The chain molecules may be simple linear structures or they may be branched or cross-linked. During the past decade, sharp fractions of the first synthetic cyclic polymer have been prepared. These fractions of cyclic poly(dimethyl­ siloxane) consist of ring molecules containing hundreds of skeletal bonds. Some of their properties have been found to be quite different from those of the corresponding linear polymers. Synthetic cyclic polymers, including cyclic polystyrene, have joined the naturally occurring circular DNAs as examples of substantially large ring molecules. This book aims to review current knowledge of cyclic polymers and biological ring macromolecules. In addition, it discusses theories of cyclic macromolecules and describes cyclization processes involving long chain molecules. Since 1865, when Kekule proposed a simple ring structure for benzene, larger and larger ring molecules have been synthesized in the laboratory and discovered in nature. Many more examples are to be expected in the future. In time, large ring molecules should take their proper place alongside long chain molecules as one of the two possible constituent structural units of polymers.