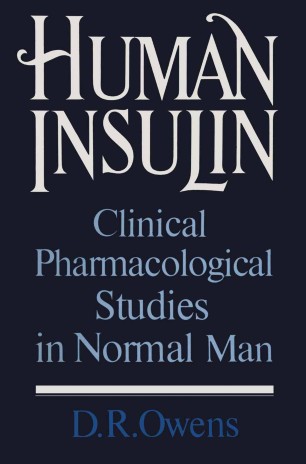 Since insulin became available for the treatment of diabetes in 1922 a number of major advances have been made, which include the modification of insulin to vary its timing of action, its purification, and latterly, the production of human insulin. Human insulin in quantities sufficiently large for therapy has been made available by two techniques developed in parallel during the late 1970s. These involve either (i) formulation in E. coli bacteria suitably encoded by DNA recombinant methods of the A- and B-chains of human insulin followed by a chain combination reaction ('biosynthetic' human insulin) or (ii) enzymatic conversion (transpeptidation) of porcine insulin brought to react with a threonine ester by porcine trypsin in a mixture of water and organic solvents, yielding human insulin ('semi-synthetic' human insulin). This book includes the first clinical-pharmacological studies of each of the highly purified 'semi-synthetic' human insulin preparations: Actrapid ® HM; Monotard® HM; Protaphane® HM; Actraphane® HM; and Ultratard® HM (Novo Industri A/S, Copenhagen). The preliminary studies established their safety and efficacy relative to their porcine and bovine counterparts emphasising the relevance of species and formulation on the pharmacokinetics and biological responses to insulin. Additional investigations with human insulin demonstrated the influence of insulin concentration, site of administration, the addition of aprotinin to insulin and the mixing of 'short-' and 'intermediate-acting' formulations on insulin 'bioavailability'. Examination of the 'within' and 'between' subject day-to-day variation in absorption and the effect of subcutaneous insulin also demonstrates the dominating influence of insulin responsiveness.