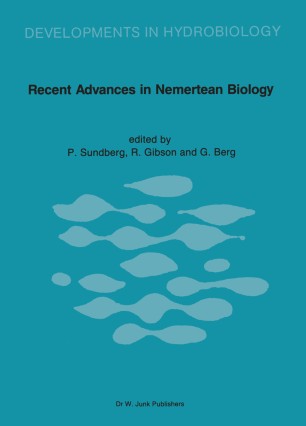 Part of the Developments in Hydrobiology book series (DIHY, volume 43)

The nemerteans are a fascinating, common and often locally abundant group of invertebrates, yet for long have attracted the attention of only a handful of scientists. In recent years, however, increasing numbers of people have developed diverse research interests in the group with the result that our knowledge of these worms has rapidly advanced. Clearly there is a need for a regular series of international meetings where individuals working on these animals can meet to exchange ideas, review developments concerning nemertean biology and freely discuss future proposals. The first such meeting was held in Philadelphia during December 1983. Twenty-seven scientists from eight countries participated in the Second International Meeting on Nemertean Biology, held at the Tjarno Marine Biological Laboratory, Sweden, 11-15 August 1986. The meeting was divid­ ed into five sessions: two dealt with ecological studies, two with nemertean taxonomy, and the final session covered aspects of general biology. A total of 26 papers was presented; four, by N. Anadem, G. Berg, 1. Bierne, and 1.M. TurbeviIIe, were for different reasons not submitted for inclusion in this volume. Three additional presentations were made on behalf of B. Kulikova, E. N. WiIImer, and Z. Yin, all of whom were unable to participate in the meeting.