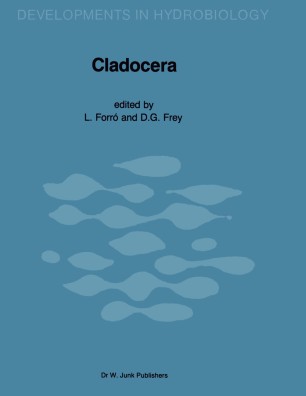 Proceedings of the Cladocera Symposium, Budapest 1985

Part of the Developments in Hydrobiology book series (DIHY, volume 35)

There is a strong tendency now for specialists in various groups of organisms, or in various processes and their consequences, to get together at more or less regular intervals to discuss their subjects. This has hap­ pened e. g. with the Chironomidae, Ephemeroptera, and Plecoptera among the aquatic insects, and the Rotifera, Copepoda, and Ostracoda among the zooplankton. Finally the scientists working with the Cladocera, who have been isolated from one another for a long time except on a personal basis, have decided to do the same, largely through the initiative and drive of L. Forro. Thus, the First International Symposium on Cladocera was held in Budapest on 12-16 August 1985. Most of the roughly 60 attendees were from Euro­ pean countries, although a fair number came from Australia, Canada, India, Nigeria, and the United States. The accompanying table presents a list of attendees by country of origin. Regrettably, a number of persons who had expressed interest in coming were unable to do so. Their names and, in two instances countries, enclosed in brackets, are given to indicate the overall extent of topics that would have been discussed. Persons who presented papers or posters are indicated by an asterisk (*). The names of persons who chaired sessions are printed in italics. A total of 34 papers and 10 posters was presented, most of which are included in this volume.