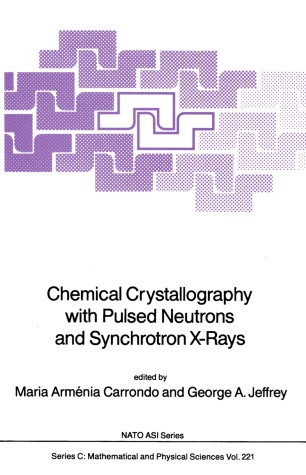 X-ray and neutron crystallography have played an increasingly impor­ tant role in the chemical and biochemical sciences over the past fifty years. The principal obstacles in this methodology, the phase problem and com­ puting, have been overcome. The former by the methods developed in the 1960's and just recognised by the 1985 Chemistry Nobel Prize award to Karle and Hauptman, the latter by the dramatic advances that have taken place in computer technology in the past twenty years. Within the last decade, two new radiation sources have been added to the crystallographer's tools. One is synchrotron X-rays and the other is spallation neutrons. Both have much more powerful fluxes than the pre­ vious sources and they are pulsed rather than continuos. New techniques are necessary to fully exploit the intense continuos radiation spectrum and its pulsed property. Both radiations are only available from particular National Laboratories on a guest-user basis for scientists outside these Na­ tional Laboratories. Hitherto, the major emphasis on the use of these facilities has been in solid-state physics, and the material, engineering and biological sciences. We believe that there is equivalent potential to applications which are pri­ marily chemical or biochemical.

`This well organized volume covers a large material and provides theoretical as well as practical information to researchers willing to be involved in the field. It may count on the interest of specialists and will surely be welcomed by chemists and biologists ...'
Reaction Kinetics and Catalysis Letters, 37:1, 1988.

`The book should be most useful to readers having a good background of crystallography and in particular, to those who are likely to make use of pulsed neutrons or synchrotron X-rays in their research programmes on chemical crystallography.'
L.M. Pant, Indian Journal of Chemistry, 27A, Dec. 1988.
Buy options