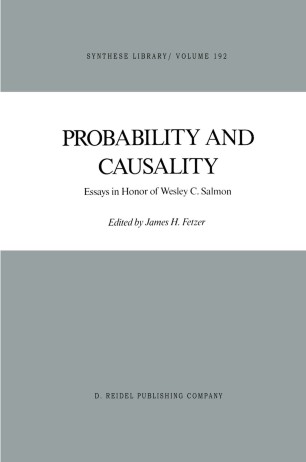 The contributions to this special collection concern issues and problems discussed in or related to the work of Wesley C. Salmon. Salmon has long been noted for his important work in the philosophy of science, which has included research on the interpretation of probability, the nature of explanation, the character of reasoning, the justification of induction, the structure of space/time and the paradoxes of Zeno, to mention only some of the most prominent. During a time of increasing preoccupation with historical and sociological approaches to under­ standing science (which characterize scientific developments as though they could be adequately analysed from the perspective of political movements, even mistaking the phenomena of conversion for the rational appraisal of scientific theories), Salmon has remained stead­ fastly devoted to isolating and justifying those normative standards distinguishing science from non-science - especially through the vindi­ cation of general principles of scientific procedure and the validation of specific examples of scientific theories - without which science itself cannot be (even remotely) adequately understood. In this respect, Salmon exemplifies and strengthens a splendid tradi­ tion whose most remarkable representatives include Hans Reichenbach, Rudolf Carnap and Carl G. Hempel, all of whom exerted a profound influence upon his own development.