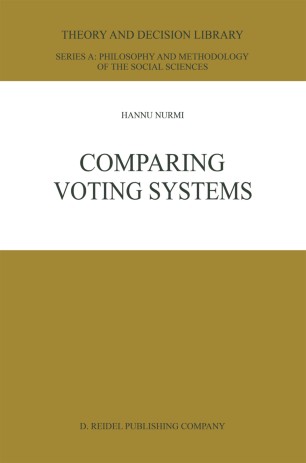 In many contexts of everyday life we find ourselves faced with the problem of reconciling the views of several persons. These problems are usually solved by resorting to some opinion aggre­ gating procedure, like voting. Very often the problem is thought of as being solved after the decision to take a vote has been made and the ballots have been counted. Most official decision making bodies have formally instituted procedures of voting but in informal groups such procedures are typically chosen in casu. Curiously enough people do not seem to pay much attention to which particular procedure is being resorted to as long as some kind of voting takes place. As we shall see shortly the procedure being used often makes a great difference to the voting outcomes. Thus, the Question arises as to which voting procedure is best. This book is devoted to a discussion of this problem in the light of various criteria of optimality. We shall deal with a number of procedures that have been proposed for use or are actually in use in voting contexts. The aim of this book is to give an evaluation of the virtues and shortcomings of these procedures. On the basis of this evaluation the reader will hopefully be able to determine which procedure is optimal for the decision setting that he or she has in mind.