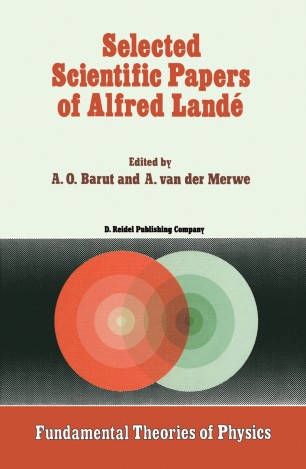 Theoretical physicists allover the world are acquainted with Lande's celebrated computation of the g factor or splitting factor or, more precisely, the magne­ togyric factor. The so-called anomalous Zeeman effect had intrigued, if not vexed, some of the most distinguished physicists of that time, such as Bohr, Sommerfeld, Pauli, and others. Lande realized that this recalcitrant effect was inseparable from the multiplet line structure - a breakthrough in understanding which he achieved in 1922 at the age of thirty four. It was in the same year that Lande discovered the interval rule for the separation of multiplet sublevels, a significant result that holds in all cases of Russell-Saunders coupling and renders comparatively easy the empirical analysis of spectral multiplets. In the twenties, Lande succeeded in constructing some original concepts of axiomatic thermodynamics by employing Caratheodory's somewhat esoteric approach as his guiding concept. Published in the Handbuch der Physik, his comprehensive treatise, evincing several novel ideas, has become a classic. Lande, Sommerfeld's student though never a true disciple, published two monographs on quantum mechanics that are remarkable for their content and exposition. In this connection it may be apposite to stress that Lande had sub­ scribed for many years to the (infelicitously named) Copenhagen interpretation.