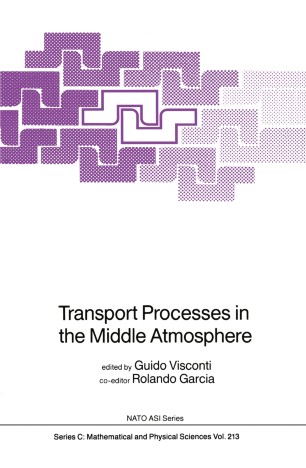 Transport Processes in the Middle Atmosphere

The NATO Advanced Research Workshop on "Transport Processes in the Middle Atmosphere" was held in Erice, Sicily, from November 23 through November 27, 1986. In addition to NATO, the workshop was supported by the International School of Atmospheric Physics of the Ettore Majorana Center for Scientific Culture, and by the National Research Council of Italy. The Organizing Committee was fortunate to enlist the participation of many of the experts in the field, and this book is an account of their contributions. In order to expedite publication and keep the results "as fresh as possible" , it was decided to forego formal review of the papers; instead, the authors were asked to solicit internal reviews from their colleagues. Further, each paper was thoroughly discussed and criticized during the meeting, and those discussions have been taken into account in the preparation of the final version of the manuscripts. Occasional short presentations were made by some of the Workshop participants who wished to provide information complementary to that given in the invited talks. These presentations are not included in this book, which contains only the invited papers. The book is organized into five chapters corresponding to the different topics cov­ ered by the Workshop. The first two chapters contain general reviews of the dynamical climatology of the middle atmosphere and of the growing body of data available on the dis­ tribution of chemical constituents.