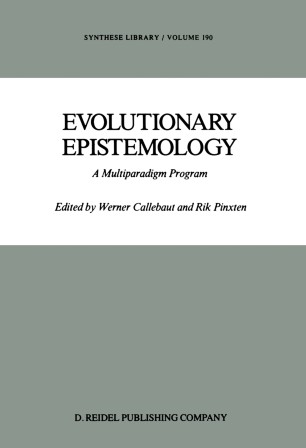 This volume has its already distant or1g1n in an inter­ national conference on Evolutionary Epistemology the editors organized at the University of Ghent in November 1984. This conference aimed to follow up the endeavor started at the ERISS (Epistemologically Relevant Internalist Sociology of Science) conference organized by Don Campbell and Alex Rosen­ berg at Cazenovia Lake, New York, in June 1981, whilst in­ jecting the gist of certain current continental intellectual developments into a debate whose focus, we thought, was in danger of being narrowed too much, considering the still underdeveloped state of affairs in the field. Broadly speaking, evolutionary epistemology today con­ sists of two interrelated, yet qualitatively distinct inves­ tigative efforts. Both are drawing on Darwinian concepts, which may explain why many people have failed to discriminate them. One is the study of the evolution of the cognitive apparatus of living organisms, which is first and foremost the province of biologists and psychologists (H. C. Plotkin, Ed. , Learning, Development, and Culture: Essays in Evolu­ tionary Epistemology, New York, Wiley, 1984), although quite a few philosophers - professional or vocational - have also felt the need to express themselves on this vast subject (F. M. Wuketits, Ed. , Conce ts and Approaches in Evolutionary Epistemology, Dordrecht Boston, Reidel, 1984). The other approach deals with the evolution of science, and has been dominated hitherto by (allegedly) 'naturalized' philosophers; no book-length survey of this literature is available at present.