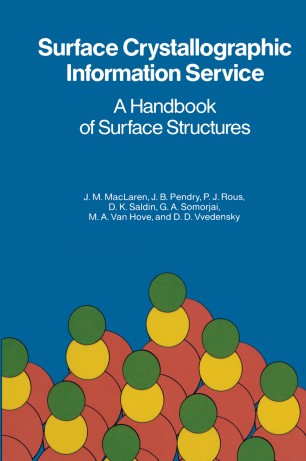 A Handbook of Surface Structures

Surface crystallography is a discipline which has come of age. There exist in the literature several hundred complete determinations of atomic configurations at surfaces: yet the number is not so great that cataloguing these structures is too daunting a task. We felt that now was the right moment to begin a compilation that could be updated at frequent intervals to give a comprehensive picture of the known surface world. The following pages are the product of our labours. Our target community is the large number of surface chemists, materials scientists, physicists and others whose work involves surfaces. As the compilation expands with time our hope is that it will become one of the standard reference works for structures: in the manner that Wyckoff and other X-ray tables are for bulk crystals. We have devoted considerable thought to the format. The system we have chosen will no doubt have its critics, and in subsequent editions may well be improved, but it has been arrived at after extensive consultation. A problem that we faced in putting structures into standard format was the diversity of conventions used in the literature. It is to be hoped that our system will have sufficient virtue to serve as a standard format for future reporting of structures. That would make it much easier for surface crystallographers to use the work of others.