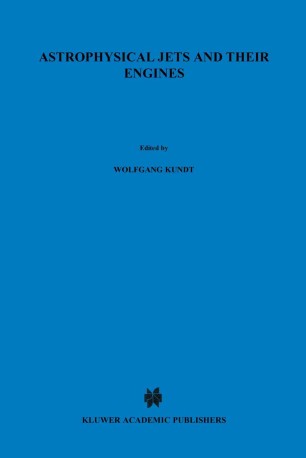 Astrophysical Jets and Their Engines

This volume is the documentation of the first Course on 'Neutron Stars, Active Galactic Nuclei and Jets', of an Erice School with a wide astro­ physical scope. The choice of the subject was made because of an apparent similari­ ty - stressed already at earlier meetings - of four classes of astrophy­ sical jet sources: Active Galactic Nuclei, Young Stellar Objects, Binary Neutron Stars and Binary White Dwarfs. They share important properties such as their morphology, high variability and large veloci­ ty gradients as well as - with some inference - their broad spectrum, hypersonic outflow and core/lobe power ratio. Despite this apparent similarity of the four source classes, quite different models have been put forward for their description: (i) The central engine of active galactic nuclei has been generally thought to be a black hole, in contrast to the central engine of young stellar objects and cometary nebulae which apparently is a pre-T-Tauri star, some six orders of magnitude less compact, and to the central engine of planetary nebulae which mayor may not be a binary white dwarf. (ii) The elongated lobes, or flow patterns, have been often interpreted as highly directional stellar wind outflows whereas in a few well­ mapped cases, the elongated flow appears to be 'pumped up' through a much narrower channel, or jet, both in the extragalactic and stellar sources.