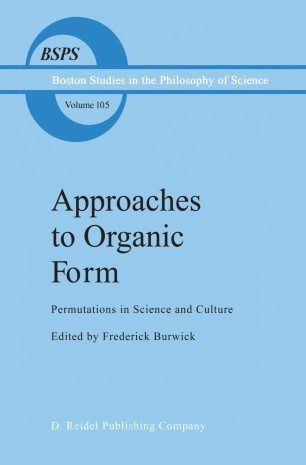 Permutations in Science and Culture

Part of the Boston Studies in the Philosophy of Science book series (BSPS, volume 105)

Frederick Burwick's modest but comprehensive and insightful intro­ duction is preface enough to these sensible essays in the history and philosophical criticism of ideas. If we want to understand how some in­ quiring and intelligent thinkers sought to go beyond mechanism and vitalism, we will find Burwick's labors of assembling others and reflect­ ing on his own part to be as stimulating as anywhere to be found. And yet his initial cautious remark is right: 'approaches', not 'attainments'. The problems associated with clarifying 'matter' and 'form' are still beyond any consensus as to their solution. Even more do we recognize the many forms and meanings of 'form', and this is so even for 'organic form'. That wise scientist-philosopher-engineer Lancelot Law Whyte struggled in a place neighboring to Burwick's, and his essay of thirty years ago might be a scientist's preface to Burwick and his colleagues: see Whyte'S Accent on Form (N. Y., Harper, 1954) and his Symposium of 1951 Aspects of Form (London, Percy Lund Humphries 1951; and Indiana University Press 1961), itself arranged in honor of D' Arcy Thompson's classical monograph On Growth and Form. Philosophy and history of science must deal with these issues, and with the mixture of hard-headedness and imagination that they de­ mand.