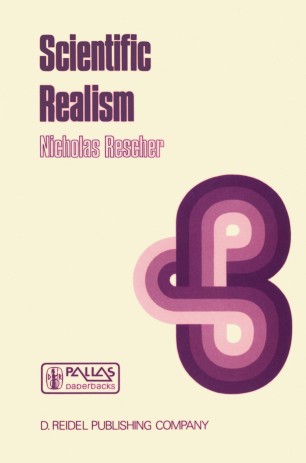 The increasingly lively controversy over scientific realism has become one of the principal themes of recent philosophy. 1 In watching this controversy unfold in the rather technical way currently in vogue, it has seemed to me that it would be useful to view these contemporary disputes against the background of such older epistemological issues as fallibilism, scepticism, relativism, and the traditional realism/idealism debate. This, then, is the object of the present book, which will recon­ sider the newer concerns about scientific realism in the context of these older philosophical themes. Historically, realism concerns itself with the real existence of things that do not "meet the eye" - with suprasensible entities that lie beyond the reach of human perception. In medieval times, discussions about realism focused upon universals. Recognizing that there are physical objects such as cats and triangular objects and red tomatoes, the medievels debated whether such "abstract objects" as cathood and triangularity and redness also exist by way of having a reality indepen­ dent of the concretely real things that exhibit them. Three fundamen­ tally different positions were defended: (1) Nominalism. Abstracta have no independent existence as such: they only "exist" in and through the objects that exhibit them. Only particulars (individual substances) exist. Abstract "objects" are existents in name only, mere thought­ fictions by whose means we address concrete particular things. (2) Realism. Abstracta have an independent existence as such.

`...a wide-ranging, well-written, and highly readable study of scientific realism in relation to both scientific practice and such philosophical issues as metaphysical realism and epistemological fallibilism. The book is especially good in interpreting the significance of scientific progress; it also delineates important aspects of scientific method and clarifies the interaction between theory and experiment. Rescher lucidly explicates major positions, draws important distinctions, and develops instructive examples. His integration of methodological objectivity with ontological fallibilism is both distinctive and impressive.'
Robert Audi, University of Nebraska-Lincoln, May 1987