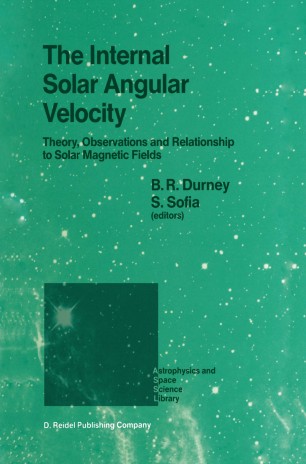 It is clear that the discovery of solar eigenmodes and the resulting possibility of probing the solar interior is an event of primary importance for solar physics in general and for theories of the inner solar angular velocity in particular. While these theories are basic for the understanding of the solar spin down, differential rotation, dynamo and activity, they are however, extremely complex, and in all likelihood only limited further progress could have been achieved without the guidance of observations. Until recently and in spite of the scant observational basis the theoretical work has moved forward as the perusal of this book shows. There cannot be any doubt, however, that the present, rapidly expanding, worldwide observational program will lead ultimately to a vigorous theoretical development of the field. It appeared to the organizers that a meeting centered on theories of the inner solar angular velocity, comprising presentations of the main research areas by the involved scientists, would significantly foster this development since it would help to clarify the basic ideas of the subject. The meeting, held at the National Solar Observatory/Sacramento Peak, from August 11 to August 14, was the eighth in a series of summer symposia at Sacramento Peak. The unqualified success of the meeting could not have been possible without the unlim­ ited devotion of the staff at Sacramento Peak, Ray Smartt, Frank and Pat Hegwer, Ramona Elrod in particular.