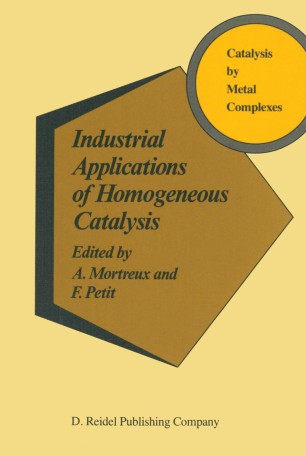 Catalysts are now widely used in both laboratory and industrial-scale chemistry. Indeed, it is hard to find any complex synthesis or industrial process that does not, at some stage, utilize a catalytic reaction. The development of homogeneous transition metal catalysts on the laboratory scale has demonstrated that these systems can be far superior to the equivalent heterogeneous systems, at least in terms of selectivity. is an increasing interest in this field of research from both an Thus, there academic and industrial point of view. In connection with the rapid developments in this area, four universities from the E.E.C (Aachen, FRG; Liege, Belgium; Milan, Italy; and Lille, France) have collaborated to organise a series of seminars for high-level students and researchers. These meetings have been sponsored by the Commission of the E.E.C and state organizations. The most recent of these meetings was held in Lille in September 1985 and this book contains updated and expanded presentations of most of the lectures given there. These lectures are concerned with the field of homogeneous transition metal catalysis and its application to the synthesis of organic intermediates and fine chemicals from an academic and industrial viewpoint. The continuing petroleum crisis which began in the early 1970s has given rise to the need to develop new feedstocks for the chemical industry.

`This is a useful addition to the literature, and is of considerably better value than many books arising from conferences and courses.'
`The editors have produced an attractive book ...'
Journal of Organometallic Chemistry, 350, 1988

`I would certainly recommend this book for purchase in libraries. Industrial and academic research groups concerned with the applications of transition metals as organic reagents and catalysts might well wish to have copies close at hand.'
Journal of Electroanalysis Chemistry, 1988
Buy options