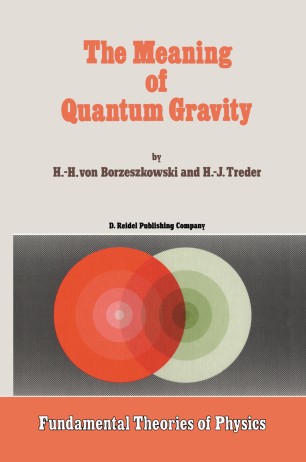 The Meaning of Quantum Gravity

In discussing the question of whether General Relativity Theory really needs to be quantized, a simply negative answer cannot be accepted, of course. Such an answer is not satisfying because, first, Einstein's gravitational equations connect gravity and non-gravitational matter and because, second, it can be taken for granted that non-gravitational matter has an atomic or quantum structure such that its energy-momentum tensor standing on the right-hand side of Einstein's equations is formed out of quantum operators. These two facts make it impossible to read the left-hand side of Einstein's equations as an ordinary classical function. This does not necessarily mean, however, that we must draw the conclusion that General Relativity Theory, similar to electrodynamics, could or should be quantized in a rigorous manner and that this quantization has similar consequences to quantum electrodynamics. In other words, when for reasons of consistency quantization is tried, then one has to ask whether and where the quantization procedure has a physical meaning, i.e., whether there exist measurable effects of quantum gravity. IQ accordance with these questions, we are mainly dealing with the discus­ sion of the principles of quantized General Relativity Theory and with the estimation of quantum effects including the question of their measurability. This analysis proves that it is impossible to distinguish between classical and quantum General Relativity Theory for the extreme case of Planck's orders of magnitude. In other words, there does not exist a physically meaningful rigorous quantization conception for Einstein's theory.