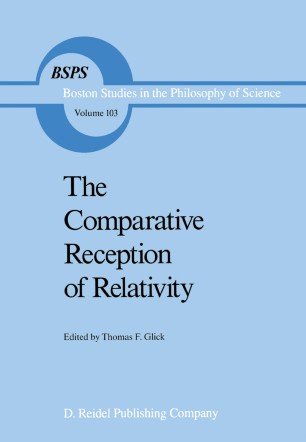 The Comparative Reception of Relativity

Part of the Boston Studies in the Philosophy of Science book series (BSPS, volume 103)

The present volume grew out of a double session of the Boston Collo­ quium for the Philosophy of Science held in Boston on March 25, 1983. The papers presented there (by Biezunski, Glick, Goldberg, and Judith Goodstein!) offered both sufficient comparability to establish regulari­ ties in the reception of relativity and Einstein's impact in France, Spain, the United States and Italy, and sufficient contrast to suggest the salience of national inflections in the process. The interaction among the participants and the added perspectives offered by members of the audience suggested the interest of commissioning articles for a more inclusive volume which would cover as many national cases as we could muster. Only general guidelines were given to the authors: to treat the special or general theories, or both, hopefully in a multidisciplinary setting, to examine the popular reception of relativity, or Einstein's personal impact, or to survey all these topics. In a previous volume, on the 2 comparative reception of Darwinism, one of us devised a detailed set of guidelines which in general were not followed. In our opinion, the studies in this collection offer greater comparability, no doubt because relativity by its nature and its complexity offers a sharper, more easily bounded target. As in the Darwinism volume, this book concludes with an essay intended to draw together in comparative perspective some of many themes addressed by the participants.