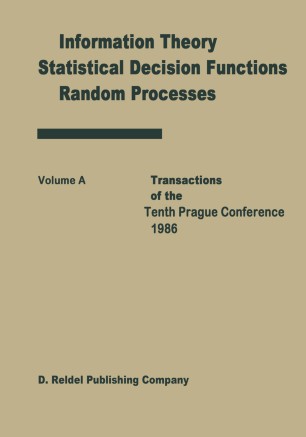 Transactions of the Tenth Prague Conference

The Conference was organized by the Institute of Information Theory and Automation of the Czechoslovak Academy of Sciences from July 7 - 11, 1986, in Prague. The round number of the conference was only one of the jubilees connected with its organization. Namely, thirty years of the Prague Conferences (the first one was organized in autumn 1956 in Liblice near Prague), and two anniversaries of Professor Anton1n Spacek, the inspirator and first organizer of the Prague Conferences - 75 years of his birth and 25 years of his untimely death. (More about Professor Spacek can be found in the Transactions of the Sixth Prague Conferen­ ce) • The Tenth Prague Conference kept the traditional style and orien­ tation typical for the previous Prague Conferences. Almost two hund­ red of participants from 23 countries (Algerie, Austria, Bulgaria, Canada, Czechoslovakia, Federal Republic of Germany, Finland, France, German Democratic Republic, Great Britain, Hungary, Iran, Italy, Ja­ pan, Netherlands, Poland, Roumania, Soviet Union, Sweden, Switzerland, United States, Vietnam and West Berlin) took part in its sessions and discussions. There were 14 invited lectures and . 92 short contri­ butions included in four parallel sections of the Conference program­ me: further, 12 contributions were presented as posters. The invited lectures and submitted contributions covered the three traditional subjects of the Prague Conferences introduced in their title, as well as lots of further applications of the probability theory and mathe­ matical statistics. Most of the presented lectures and contributions are published in the present Conference Transactions.