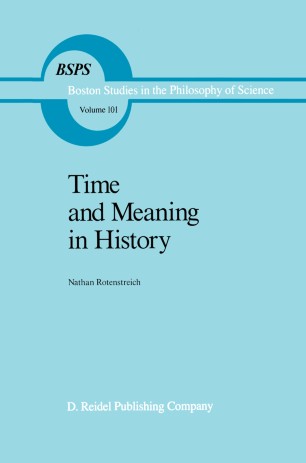 Time and Meaning in History

Part of the Boston Studies in the Philosophy of Science book series (BSPS, volume 101)

There are several characteristics of Nathan Rotenstreich's work which are striking: his thoughtful writings are both subtle and deep; they are steeped in his critical appreciation of other thinkers of this and preceding times, an appreciation which is formed by his learned understanding of the history of philosophy; and with all this, he has an original and independent intelligence. He has from time to time brought his skills to bear upon historical scholarship, most notably perhaps in his book Between Past and Present (1958, 2nd edition, 1973), his interpretive essays in the philosophy of history Philosophy, History and Politics (1976) and his scholarly work concerned with the influence of historical development upon modern Jewish thought, Tradition and Reality (1972). Related to these, and equally works of that philosophical humanity which Professor Rotenstreich embodies, are his Humanism in the Contemporary Era (1963), Spirit and Man: An Essay on Being and Value (1963) and Reflection and Action (1983). Rotenstreich combines both the naturalistic and the phenomenological attitudes in an interesting and illuminating way through the full spectrum of issues in the philosophy of history in this century. Surely he sets boundaries to any doubtful extrapolation. Not only would he bring the understanding of history back from those who claim it as only a positive science but equally would he prevent the transformation of that understanding into merely speculative inquiry.