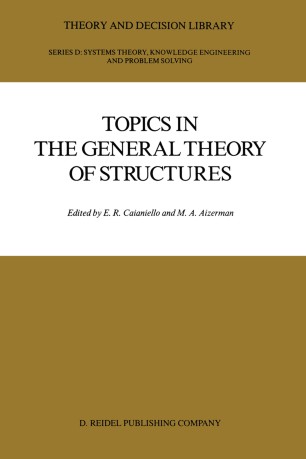 Topics in the General Theory of Structures

This volume is about "Structure". The search for "structure", always the pursuit of sciences within their specific areas and perspectives, is witnessing these days a dra­ matic revolution. The coexistence and interaction of so many structures (atoms, hu­ mans, cosmos and all that there is in between) would be unconceivable according to many experts, if there were not, behind it all, some gen­ eral organizational principle. s that (at least in some asymptotic way) make possible so many equilibria among species and natural objects, fan­ tastically tuned to an extremely high degree of precision. The evidence accumulates to an increasingly impressive degree; a concrete example comes from physics, whose constant aim always was and is that of searching for "ultimate laws", out of which everything should follow, from quarks to the cosmos. Our notions and philosophy have un­ dergone major revolutions, whenever the "unthinkable" has been changed by its wonderful endeavours into "fact". Well, it is just from physics that evidence comes: even if the "ultimate" could be reached, it would not in any way be a terminal point. When "complexity" comes into the game, entirely new notions have to be invented; they all have to do with "structure", though this time in a much wider sense than would have been understood a decade or so ago.