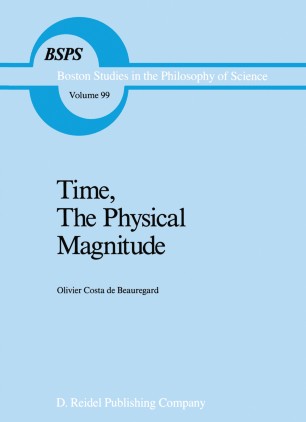 Part of the Boston Studies in the Philosophy of Science book series (BSPS, volume 99)

In an age characterized by impersonality and a fear of individuality this book is indeed unusual. It is personal, individualistic and idiosyncratic - a record of the scientific adventure of a single mind. Most scientific writing today is so depersonalized that it is impossible to recognize the man behind the work, even when one knows him. Costa de Beauregard's scientific career has focused on three domains - special relativity, statistics and irreversibility, and quantum mechanics. In Time, the Physical Magnitude he has provided a personal vade mecum to those problems, concepts, and ideas with which he has been so long preoccupied. Some years ago we were struck by a simple and profound observa­ tion of Mendel Sachs, the gist of which follows. Relativity is based on very simple ideas but, because it requires highly complicated mathe­ matics, people find it difficult. Quantum mechanics, on the other hand, derives from very complicated principles but, since its mathematics is straightforward, people feel they understand it. In some ways they are like the bourgeois gentilhomme of Moliere in that they speak quantum mechanics without knowing what it is. Costa de Beauregard recognizes the complexity of quantum mechanics. A great virtue of the book is that he does not hide or shy away from the complexity. He exposes it fully while presenting his ideas in a non-dogmatic way.