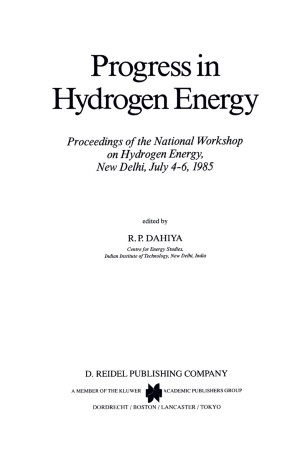 Hydrogen has been recognised as a universal, clean fuel which is expected to provide energy to our homes, industry and automobiles in the future. It is considered as one of the most interesting alternat~ves to petroleum fuels. A considerable amount of research and development work on product­ ion, storage and transportation, and utilisation of hydrogen is in pro­ gress allover the world. In India, several institutions have been working on the various aspects of the hydrogen considering it as an energy vector. A three-day National Workshop on Hydrogen Energy was organised at Indian Institute of Technology (lIT) Delhi to focus attent­ ion on developments in hydrogen energy at national and international levels and to provide a forum to coordinate contemporary research trends in the country in this field. The presentations made at the Workshop covered the topics which are considered to be of significance to work out the perspective, problems and promises for the future for transition to hydrogen energy. The proceedings of the Workshop are reported in this book, which include the inaugural address, description of the national research and development programme in the field of hydrogen energy, papers presented on production, storage and transportation, and utilisation of hydrogen and the panel report. In the inaugural address, emphasis is laid on the need for a trans­ ition from the presently used fuels to the newer ones, preferably to those which are renewable and non-polluting such as hydrogen.