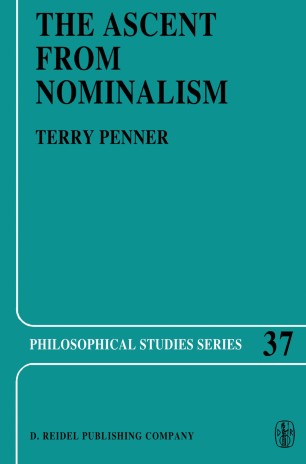 The Ascent from Nominalism

divisibility in Physics VI. I had been assuming at that time that Aristotle's elimination of reference to the infinitely large in his account of the potential inf inite--like the elimination of the infinitely small from nineteenth century accounts of limits and continuity--gave us everything that was important in a theory of the infinite. Hilbert's paper showed me that this was not obviously so. Suddenly other certainties about Aristotle's (apparently) judicious toning down of (supposed) Platonic extremisms began to crumble. The upshot of work I had been doing earlier on Plato's 'Third Man Argument' began to look different from the way it had before. I was confronted with a possibility I had not till then so much as entertained. What if the more extreme posi­ tions of Plato on these issues were the more likely to be correct? The present work is the first instalment of the result­ ing reassessment of Plato's metaphysics, and especially of his theory of Forms. It has occupied much of my teaching and scholarly time over the past fifteen years and more. The central question wi th which I concern myself is, "How does Plato argue for the existence of his Forms (if he does )7" The idea of making this the central question is that if we know how he argues for the existence of Forms, we may get a better sense of what they are.