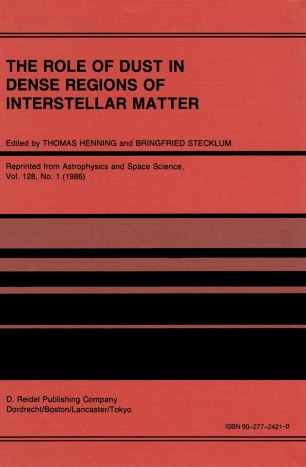 The Role of Dust in Dense Regions of Interstellar Matter

TH. HENNING and B. STECKLUM University Observatory. Jena This workshop was organized by the University Observatory Jena and devoted to the physics and chemistry of dense regions of interstellar matter. It was especially dealing with the properties of interstellar dust grains and star formation in those regions. This field of research was opened in Jena already in the 1950s and an early fA U Colloquium on the topic of interstellar matter was held here in 1969. Since that time, the subject of interstellar matter has grown into a much more important part of astrophysics than it was in 1969. Now we are beginning to understand the process of star formation in a greater detail. The discovery of many interstellar molecules by radioastronomers opened the new field of interstellar chemistry. In addition, the application of the new techniques of infrared astronomy led to the discovery of several absorption bands, e. g. , the 3. 1 11m ice band, which pointed to the existence of grain mantles. More recently, the detection of infrared emission lines was the first hint to the existence of a new component of interstellar matter. All these things were discussed extensively during the workshop. The very successful IRAS mission, which was also a subject of this workshop, gave us many new insights and unexpected findings, e. g. , the detection of infrared cirrus clouds.