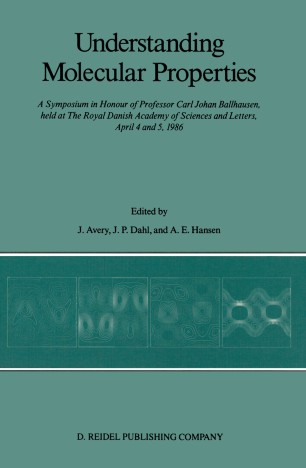 A Symposium in Honour of Professor Carl Johan Ballhausen, held at The Royal Danish Academy of Sciences and Letters, April 4 and 5, 1986

"The Theory of Atomic Spectra", surrrrnanzlllg all that was then known about the quantum theory of free atoms; and in 1961, J.S. Griffith published "The Theory of Transition Metal Ions", in which he combined the ideas in Condon and Shortley's book with those of Bethe, Schlapp, Penney and Van Vleck. All this work, however, was done by physicists, and the results were reported in a way which was more accessable to physicists than to chemists. In the meantime, Carl J. Ballhausen had been studying quantum theory with W. Moffitt at Harvard; and in 1962 (almost simultaneously with Griffith) he published his extremely important book, "Introduction to Ligand Field Theory". This influential book was written from the standpoint of a chemist, and it became the standard work from which chemists learned the quantum theory of transition metal complexes. While it treated in detail the group theoretical aspects of crystal field theory, Carl J. Ballhausen's book also emphasized the limitations of the theory. As he pointed out, it is often not sufficient to treat the central metal ion as free (apart from the influence of the charges on the surrounding ligands): - In many cases hybridization of metal and ligand orbitals is significant. Thus, in general. a molecular orbital treatment is needed to describe transition metal complexes. However, much of the group theory developed In connection with crystal field theory can also be used in the molecular orbital treatment.