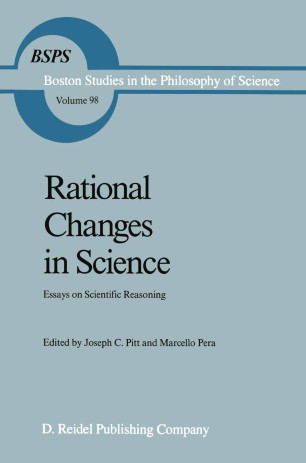 Part of the Boston Studies in the Philosophy of Science book series (BSPS, volume 98)

THE PROBLEMS OF SCIENTIFIC RATIONALITY Fashion is a fickle mistress. Only yesterday scientific rationality enjoyed considerable attention, consideration, and even reverence among phi­ losophers; "but today's fashion leads us to despise it, and the matron, rejected and abandoned as Hecuba, complains; modo maxima rerum, tot generis natisque potens - nunc trahor exui, inops", to cite Kant for our purpose, who cited Ovid for his. Like every fashion, ours also has its paradoxical aspects, as John Watkins correctly reminds in an essay in this volume. Enthusiasm for science was high among philosophers when significant scientific results were mostly a promise, it declined when that promise became an undeniable reality. Nevertheless, as with the decline of any fashion, even the revolt against scientific rationality has some reasonable grounds. If the taste of the philosophical community has changed so much, it is not due to an incident or a whim. This volume is not about the history of and reasons for this change. Instead, it provides a view of the new emerging image of scientific rationality in both its philosophical and historical aspects. In particular, the aim of the contributions gathered here is to focus on the concept around which the discussions about rationality have mostly taken place: scientific change.