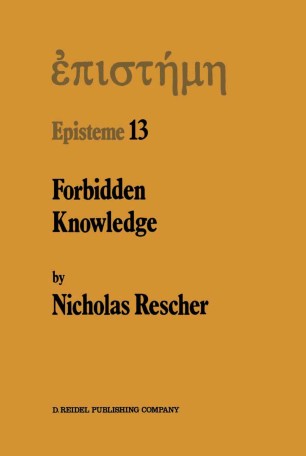 And Other Essays on the Philosophy of Cognition

This volume collects together eleven essays in epistemology, written during the past three years. They are mostly unpublished, just four of them having appeared previously (numbers two, three, four and eleven). Detailed acknowledgement of prior publication is made in the notes to the relevant chapters. I am indebted to the editors of the several publications involved for their kind permission to use this material. And I am particularly grateful to my friend, Professor Mario Bunge, for his interest in my work and for his willingness to include this sample of it in his 'Episteme' series. NICHOLAS RESCHER Pittsburgh, PA December, 1986 xi INTRODUCTION The philosophy of knowledge covers a vast and enormously diversified terrain. Within this broad area, the essays that comprise the present book deal specifically with the following issues: 1. The moral dimension of inquiry - in particular, scientific inquiry into the ways of the world (Chapter 1) 2. The epistemic status of such cognitive 'values' of inquiry as - coherence (Chapter 2) - consistency (Chapter 3) - completeness (Chapter 4) 3. The cognitive bearing of probabilistic considerations (Chapters 5 and 6) 4. The epistemic status of certain ideal desiderata of cognition, such as - totality (Chapter 7) - precision (Chapter 8) - exactness (Chapter 9) 5.