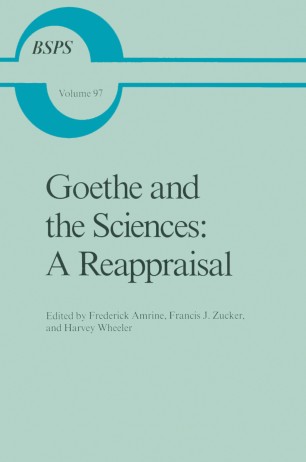 Goethe and the Sciences: A Reappraisal

Part of the Boston Studies in the Philosophy of Science book series (BSPS, volume 97)

of him in like measure within myself, that is my highest wish. This noble individual was not conscious of the fact that at that very moment the divine within him and the divine of the universe were most intimately united. So, for Goethe, the resonance with a natural rationality seems part of the genius of modern science. Einstein's 'cosmic religion', which reflects Spinoza, also echoes Goethe's remark (Ibid. , Item 575 from 1829): Man must cling to the belief that the incomprehensible is comprehensible. Else he would give up investigating. But how far will Goethe share the devotion of these cosmic rationalists to the beautiful harmonies of mathematics, so distant from any pure and 'direct observation'? Kepler, Spinoza, Einstein need not, and would not, rest with discovery of a pattern within, behind, as a source of, the phenomenal world, and they would not let even the most profound of descriptive generalities satisfy scientific curiosity. For his part, Goethe sought fundamental archetypes, as in his intuition of a Urpjlanze, basic to all plants, infinitely plastic. When such would be found, Goethe would be content, for (as he said to Eckermann, Feb. 18, 1829): . . . to seek something behind (the Urphaenomenon) is futile. Here is the limit. But as a rule men are not satisfied to behold an Urphaenomenon. They think there must be something beyond. They are like children who, having looked into a mirror, turn it around to see what is on the other side.

' This book will be of interest to both historians and philosophers of science ...'
M. Riegner, The Quarterly Review of Biology, vol. 63, September 1988
Buy options