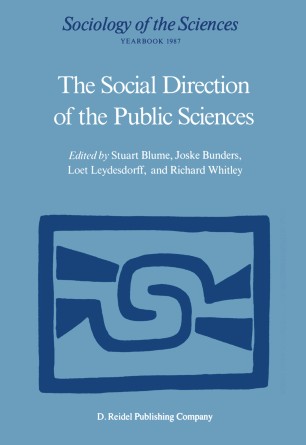 The Social Direction of the Public Sciences

Part of the Sociology of the Sciences book series (SOSC, volume 11)

This volume of the Sociology of the Sciences Yearbooks stems from our experience that collaborations between non-scientists and scientists, often initiated by scientists seeking greater social relevance for science, can be of major importance for cognitive development. It seemed to us that it would be useful to explore the conditions under which such collaborations affect scientific change and the nature of the processes involved. This book therefore focuses on a number of instances in which scientists and non-scientists were jointly involved in the genera­ tion of scientific results at the "interface" of science and society. Despite the considerable variety of cases reported here, a number of questions are central. Under what conditions do such cooperative processes occur? What perceptions of social relevance and what sorts of col­ laborations with non-scientific groups are involved? How is this collaboration achieved, and through what forums? How can insights into its conditions and mechanisms stabilize such cooperations over a longer period of time? If they are stabilized, do they really affect science, or do they mainly function to shield the rest of the science system against external influences? These questions are pertinent both to intellectual problems in the sociology of science and to the practical concerns of modern science policies. The significance of relations between knowledge producers and knowledge consumers and interest in how these relations affect science and society have changed considerably in recent decades.