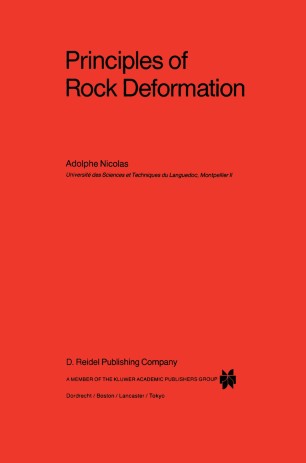 Physicists attempt to reduce natural phenomena to their essential dimensions by means of simplification and approximation and to account for them by defining natural laws. Paradoxically, whilst there is a critical need in geology to reduce the overwhelming field information to its essentials, it often re­ mains in an over-descriptive state. This prudent attitude of geologists is dictated by the nature of the subjects being consi­ dered, as it is often difficult to derive the significant parame­ ters from the raw data. It also follows from the way that geolo­ gical work is carried out. Geologists proceed, as in a police investigation, by trying to reconstruct past conditions and events from an analysis of the features preserved in rocks. In physics all knowledge is based on experiment but in the Earth Sciences experimental evidence is of very limited scope and is difficult to interpret. The geologist's cautious approach in accepting evidence gained by modelling and quantification is sometimes questionable when it is taken too far. It shuts out potentially fruitful lines of advance; for instance when refu­ sing order of magnitude calculations, it risks being drowned in anthropomorphic speculation. Happily nowadays, many more studies tend to separate and order the significant facts and are carried out with numerical constraints, which although they are approxi­ mate in nature, limit the range of hypotheses and thus give rise to new models.

`The international standing of the author and the clarity of his explanation and illustration make the book a worthwhile addition to libraries worldwide.' Geological Magazine (about the French edition)
`... it will prove valuable not only in undergraduate structural geology courses, but also to the interested non-specialist. The book is well illustrated with abundant line diagrams.' Geophysical Journal of the Royal Astronomical Society