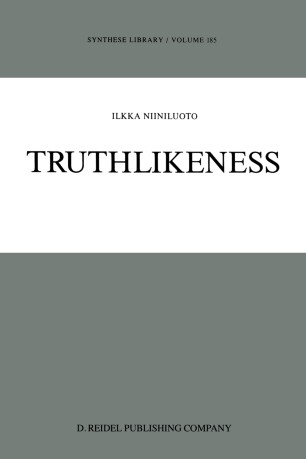 The modern discussion on the concept of truthlikeness was started in 1960. In his influential Word and Object, W. V. O. Quine argued that Charles Peirce's definition of truth as the limit of inquiry is faulty for the reason that the notion 'nearer than' is only "defined for numbers and not for theories". In his contribution to the 1960 International Congress for Logic, Methodology, and Philosophy of Science at Stan­ ford, Karl Popper defended the opposite view by defining a compara­ tive notion of verisimilitude for theories. was originally introduced by the The concept of verisimilitude Ancient sceptics to moderate their radical thesis of the inaccessibility of truth. But soon verisimilitudo, indicating likeness to the truth, was confused with probabilitas, which expresses an opiniotative attitude weaker than full certainty. The idea of truthlikeness fell in disrepute also as a result of the careless, often confused and metaphysically loaded way in which many philosophers used - and still use - such concepts as 'degree of truth', 'approximate truth', 'partial truth', and 'approach to the truth'. Popper's great achievement was his insight that the criticism against truthlikeness - by those who urge that it is meaningless to speak about 'closeness to truth' - is more based on prejudice than argument.