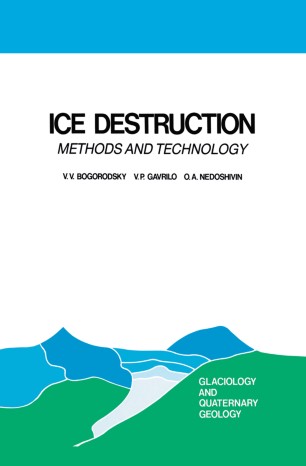 The problem of ice destruction comes most frequently to our attention in engineering glaciology and ice engineering because it is essential in the solution of many problems in the polar regions of the Earth. Ice destruction (like the destruction of any other material, in principle) is a complex problem at the junction of solid-state physics, continuum mechanics, and materials science. Ice, particularly sea ice, is characterized by known anomalies that can be explained by the simultaneous occurrence of solid, liquid and gaseous phases. Even minor temperature fluctuations cause changes in the relationship of these phases and, as a consequence, change the physico-mechanical properties of ice. New hydraulic engineering tasks, associated with the destruction of such a complex material, demand continuous improvement of methods and techniques. The present authors have brought these together in a form which is convenient for a wide range of users. This book covers only local ice destruction, by means other than icebreakers, requiring comparatively low consumption of power in proportion to the volume and mass of destroyed ice. Problems of natural ice destruction under the influence of solar radiation, tidal, wind and wave factors are not dis­ cussed. Mechanical and thermal methods were the first of many to be used for ice destruction. Their application has involved a greater num­ ber of techniques, so the first two chapters are the longest.