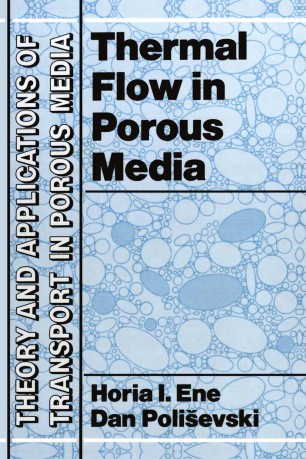 Part of the Theory and Applications of Transport in Porous Media book series (TATP, volume 1)

The transport of heat through a porous medium in the presence of exterior forces, generally produced by the Earth's gravitational field and/or a pressure gradient, is called conduction when the Darcean fluid is static (motionless), and convection when the Darcean fluid is in motion. It is customary to use the term convection also to describe the motion which arises from the density differences due to temperature gradients within the Darcean fluid. We think that because this last phenomenon is more general it should be given a specific name; here we call it thermal flow. In the sense of the above definitions, convection and thermal flow are two distinct phenomena (they occur together, in underground combustion for instance), and the convective motion which arises when a Darcean l'luid is in contact with a source of heat is a particular case of thermal flow. Thermal flow occurs naturally and is important in many geophysical and industrial problems, particularly in oil exploration, and in the petroleum, chemical and nuclear industries (for instance, in the evaluation of capability of heat-removal from a hypothetical accident in a nuclear reactor). It can play a part in the transfer of heat from the deep interior of the Earth to a shallow depth in the geothermal regions. However, in the field of energy conversion little attention has yet been paid to the insulating characteristics of the saturated porous materials introduced in some enclosures (storage tanks) to decrease the convective and radiative transfer of heat.