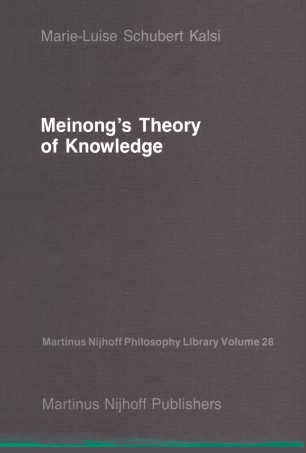 In recent years there has been a renewal of interest in Meinong's work; but since the bulk of it is still encased in his quite forbidding German, most students are limited to the few available translations and to secondary sources. Unfortunately Meinong has been much maligned - only in a few instances with good reason - and has consequently been dealt with lightly. Meinong stood at a very important junction of European philosophical and scien­ tific thought. In all fields - physics, chemistry, mathematics, psychology, philolo- revolutionary strides were being made. Philosophy, on the other hand, had run its post-Kantian course. New philosophical thinkers came from different disciplines. For example, Frege and later Russell were mathematicians, Boltzmann and Mach were physicists. Earlier Bolzano and then Brentano were originally theologians, and Meinong was a historian. 1 The sciences with their new insights and theories offered an enormous wealth of information which needed to be absorbed philosophically; but traditional philosophy could not deal with it. Physics presented a picture of reality which did not fit into the traditional schemes of empiricism or idealism. Ontological and epistemological questions became once again wide open issues. For example, atoms at first were still considered to be theoretical entities.