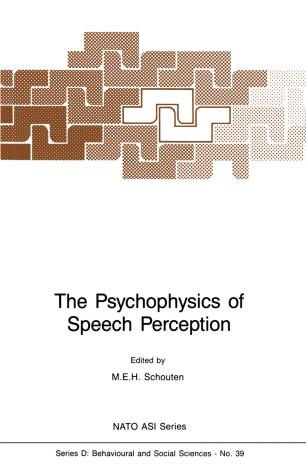 The Psychophysics of Speech Perception

The following is a passage from our application for NATO­ sponsorship: "In the main, the participants in this workshop on the Psychophysics of Speech Perception come from two areas of research: - one area is that of speech perception researc,h, in which the perception of speech sounds is investigated; - the other area is that of psychoacoustics, or auditory psychophysics, in which the perception of simple non-speech sounds, such as pure tones or noise bursts, is investigated, in order to determine the properties of the hearing mechanism. Al though there is widespread agreement among both speech researchers and auditory psychophysicists that there should be a great deal of co-operation between them, the two areas have, generally speaking, remained separate, each with its own research questions, paradigms, and above all, traditions. Psychoacousticians have, so far, continued to investigate the peripheral hearing organ by means of simple sounds, regarding the preoccupations of speech researchers as too many near-empty theories in need of a more solid factual base. Speech perception researchers, on the other hand, have continued to investigate the way human listeners classify vowels and consonants, claiming that psychoacoustics is not concerned with normal, everyday, human perception.