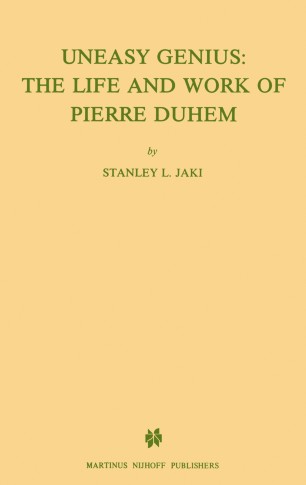 Uneasy Genius: The Life And Work Of Pierre Duhem

Part of the International Archives of the History of Ideas book series (ARCH, volume 100)

A hundred years have now gone by since in the midsummer of 1882 Pierre Duhem, a graduate of College Stanislas, completed with brilliant success his entrance exams to the Ecole Normale Superieure and embarked on his career as a theoretical physicist. His father, a textile salesman, hoped that Hierre would pursue a career in business, one of the few professional fields where perhaps he would not have succeeded. Not that young Duhem lacked sense for the practical. He could have easily made a name for himself as an artist had he developed professionally his skill to draw portraits and landscapes. His ability to make a point and his readiness to join in a debate, could have earned him fame as a lawyer. A potential actor was in sight when he entertained friends with mimicry. That as a student of physics he entered and stayed first in his class at the Ecole Normale, did not thwart his talents for the life sciences. No less a biologist than Pasteur tried to obtain Duhem for assistant. His command of Greek and Latin would have secured him a career as a classicist. He was a Frenchman, not to be met too often, whose rightful ad­ miration for and mastery of his native tongue, did not prove a barrier to the major modern languages. As one who taught himself the complex art of medieval paleo­ graphy, he could easily have mastered the many auxiliary sciences needed by a consummate historian.