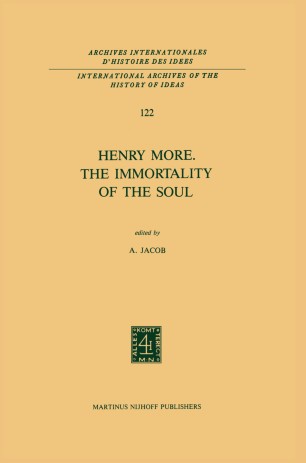 Henry More. The Immortality of the Soul

The significance of Henry More's vitalist philosophy in the history of ideas has been realized relatively recently, as the bibliography will reveal. The general neglect of the Cambridge Platonist movement may be attributed to the common prejudice that its chief exponents, especially More, were obscure mystics who were neither coherent in their philosophical system nor attractive in their prose style. I hope that this modern edition of More's principal treatise will help to correct this unjust im­ pression and reveal the keenness and originality of More's intellect, which sought to demonstrate the relevance of classical philosophy in an age of empirical science. The wealth of learning -- ranging as it does from Greek antiquity to 17th­ century science and philosophy -- that informs More' s intellectual system of the universe should, in itself, be a recom­ mendation to students of the history of ideas. Though, for those in search of literary satisfaction, too, there is not wanting, in More's style, the humour, and grace, of a man whose erudition did not divorce him from a sympathetic understanding of human contradictions. As for More's elaborate speculations concerning the spirit world in the final book of this treatise, I think that we would indeed be justified in regarding their combination of classical mythology amd scientific naturalism as the literary and philosophical counterpart of the great celestial frescoes of the Baroque masters.