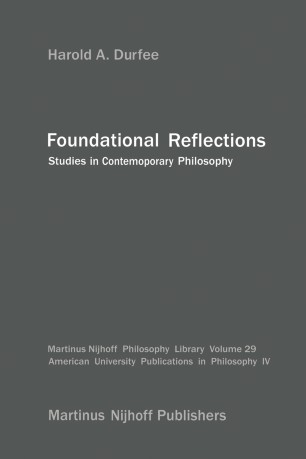 The American University Publications In From its inception Philosophy has continued the direction stated in the sub-title of the initial volume that of probing new directions in philosophy. As the series has developed these probings of new directions have taken the two­ fold direction of exploring the relationships between the disparate traditions of twentieth century philosophy and with developing new insights into the foundations of some enduring philosophic problems. This present volume continues both of these directions. The interaction between twentieth-century Anglo-Saxon and Continental philosophy which was an implicit theme of our first and third volumes and the explicit subject of our second volume is here continued in a series of studies on major figures and topics in each tradition. In the context of these interpretative studies, Professor Durfee returns again and again to the question of the relationships between the will and the reason, and explores the conflicting goals of creativity and objectivity in formulating a philosophic position. In so doing he raises the issue as his title suggests - of the foundations of philosophy itself. He seriously challenges the belief common to both pheomenology and analytic philosophy that philosophizing can be a presuppositionless activity, objectively persued independent of the personal (and, perhaps, arbitrary) commitments of the philosopher. This issue, critical as it is to all forms of philosophy, is surely a worthy one for a series such as ours.