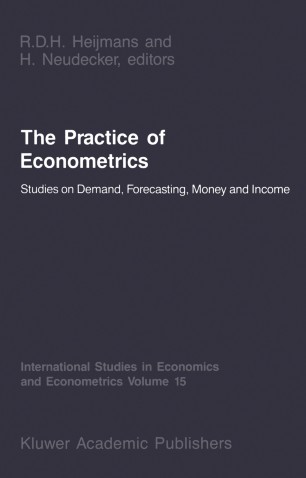 The Practice of Econometrics

Part of the International Studies in Economics and Econometrics book series (ISEE, volume 15)

In the autumn of 1961 Jan Salomon ('Mars') Cramer was appointed to the newly established chair of econometrics at the University of Amsterdam. This volume is published to commemorate this event. It is well-known how much econometrics has developed over the period under consideration, the 25 years that elapsed between 1961 and 1986. This is specifically true for the areas in which Cramer has been actively interested. We mention the theory and measurement of consumer behaviour; money and income; regression, correla­ tion and forecasting. In the present volume this development will be high­ lighted. Sixteen contributions have been sollicited from scholars all over the world who have belonged to the circle of academic friends of Cramer for a shorter or longer part of the period of 25 years. The contributions fall broadly speaking into the four areas mentioned above. Theory and measurement of consumer behaviour is represented by four papers, whereas a fifth paper deals with a related area. Richard Blundell and Costas Meghir devote a paper to the estimation of Engel curves. They apply a discrete choice model to British (individual) data from the Family Expenditure Survey 1981. Their aim is to assess the impact of individual characteristics such as income, demographic structure, location, wages and prices on commodity expenditure.