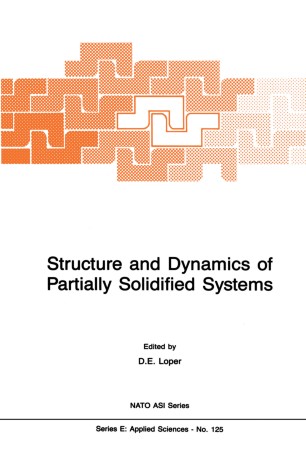 This volume contains papers presented at the NATO Advanced Research Workshop on the Structure and Dynamics of Partially Solidified Systems held at Stanford Sierra Lodge, Tahoe, California, May 12-16, 1986. This work­ shop grew out of a realization that there was a significant amount of interest and activity in this topic in several unrelated disciplines, and that it would be mutually beneficial to bring together those mathemati'­ cians, scientists and engineers interested in this subject to share their knowledge and ideas with each other. Partially solidified systems occur in a variety of natural and man­ made environments. Perhaps the most well-known occurrence involves the solidification of metallic alloys. Typically as a molten alloy is cooled, the solid phase advances from the cold boundary into the liquid as a branching forest of dendritic crystals. This creates a region of mixed solid and liquid phases, commonly referred to as a mushy zone, in which the solid forms a rigidly connected framework with the liquid occurring in the intercrystalline gaps. In addition to the casting of metallic alloys, mushy zones can occur in weld pools, the Earth's core and. mantle, magma chambers, temperate glaciers, frozen soils, frozen lakes and sea ice. A second mechanical configuration for the solid phase is as a suspension of small crystals within the liquid; this is referred to as a slurry.