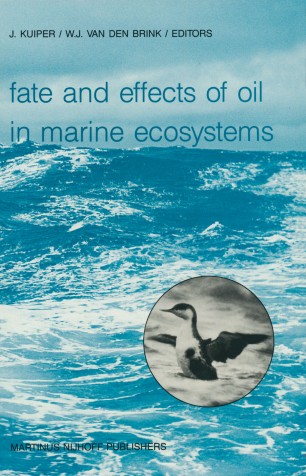 Fate and Effects of Oil in Marine Ecosystems

Proceedings of the Conference on Oil Pollution Organized under the auspices of the International Association on Water Pollution Research and Control (IAWPRC) by the Netherlands Organization for Applied Scientific Research TNO Amsterdam, The Netherlands, 23–27 February 1987

A. Rorsch Member of the TNO Board of Management Like all living creatures man has from the very outset influenced the environment. Initially, the traces of human activity were hardly noticeable and so were their effects on the equilibrium of the ecosystem as such. However, as soon as man learned how to use tools, he was able to influence his surroundings more drastically, and to proliferate more rapidly. As a matter of fact that is the time when things went wrong, because a process was started off which was to continue with ever-increasing speed and on an ever­ increasing scale. The present condition of nature as a result of the activities of mankind is generally known. Whether it is an accident with a nuclear plant or the vanishing of tropical rain forests, acid deposition or the pollution of soil, water and air, environmental disasters almost seem to be the order of the day. It is striking that with all these - more or less arbitrary - examples the provision of energy plays a role. In this respect one can add an even more important energy carrier to the list, namely: crude oil.