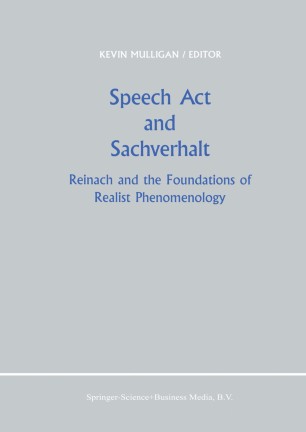 Reinach and the Foundations of Realist Phenomenology

Phenomenology as practised by Adolf Reinach ( 1883-191 7) in his all too brief philosophical career exemplifies all the virtues of Husserl's Logical Investigations. It is sober, concerned to be clear and deals with specific problems. It is therefore understandable that, in a philosophical climate in which Husserl's masterpiece has come to be regarded as a mere stepping stone on the way to his later Phenomeno­ logy, or even to the writings of a Heidegger, Reinach's contributions to exact philo­ sophy have been all but totally forgotten. The topics on which Reinach wrote most illuminatingly, speech acts (which he called 'social acts') and states of affairs (Sachverhalte ), as well as his realism about the external world, have come to be regarded as the preserve of other traditions of exact philosophy. Like my fellow­ contributors, I hope that the present volume will go some way towards correcting this unfortunate historical accident. Reinach's account of judgements and states of affairs, an account that precedes those of Russell and Wittgenstein, his 1913 treatment of speech acts, his reinter­ pretation of Hume and aspects of his legal philosophy are the main philosophical topics dealt with in what follows. But his analysis of deliberation as well as his work on movement and Zeno's paradoxes get only a passing mention.