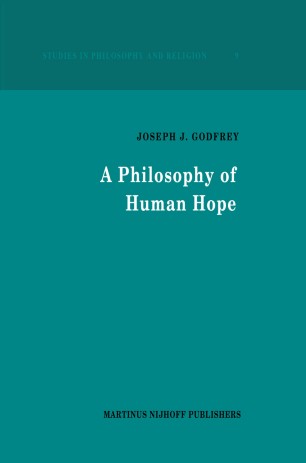 A Philosophy of Human Hope

Part of the Studies in Philosophy and Religion book series (STPAR, volume 9)

Few reference works in philosophy have articles on hope. Few also are systematic or large-scale philosophical studies of hope. Hope is admitted to be important in people's lives, but as a topic for study, hope has largely been left to psychologists and theologians. For the most part philosophers treat hope en passant. My aim is to outline a general theory of hope, to explore its structure, forms, goals, reasonableness, and implications, and to trace the implications of such a theory for atheism or theism. What has been written is quite disparate. Some see hope in an individualistic, often existential, way, and some in a social and political way. Hope is proposed by some as essentially atheistic, and by others as incomprehensible outside of one or another kind of theism. Is it possible to think consistently and at the same time comprehensively about the phenomenon of human hoping? Or is it several phenomena? How could there be such diverse understandings of so central a human experience? On what rational basis could people differ over whether hope is linked to God? What I offer here is a systematic analysis, but one worked out in dialogue with Ernst Bloch, Immanuel Kant, and Gabriel Marcel. Ernst Bloch of course was a Marxist and officially an atheist, Gabriel Marcel a Christian theist, and Immanuel Kant was a theist, but not in a conventional way.