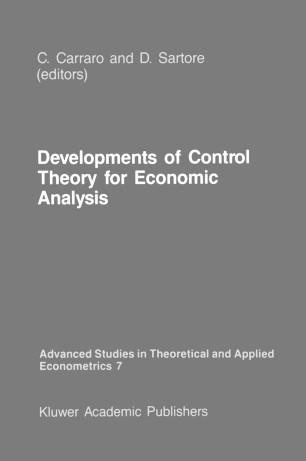 Giovanni Castellani Rector of the University of Venice This book contains the Proceedings of the Conference on "Economic Policy and Control Theory" which was held at the University of Venice (Italy) on 27 January-l February 1985. The goal of the Conference was to survey the main developments of control theory in economics, by emphasizing particularly new achievements in the analysis of dynamic economic models by con­ trol methods. The development of control theory is strictly related to the development of science and technology in the last forty years. Control theory was indeed applied mainly in engineering, and only in the sixties economists started using control methods for analys­ ing economic problems, even if some preliminary economic applica­ tions of calculus of variations, from which control theory was then developed, date back to the twenties. Applications of control theory in economics also had to solve new, complicated, problems, like those encountered in optimal growth models, or like the determination of the appropriate inter­ temporal social welfare function, of the policy horizon and the relative final state of the system, of the appropriate discount factor. Furthermore, the uncertainty characterizing economic models had to be taken into account, thus giving rise to the development of stochastic control theory in economics.